Gov. Cuomo’s stealth plan to demolish six blocks around Penn Station and build 10 skyscrapers without a city review has hit a snag, with Albany Democrats trying to yank $1.3 billion earmarked for the project from the state budget.

Meanwhile, a group of lawmakers sent a letter to Cuomo Friday saying the plan for his Empire Station Complex — a massive, years-long project in an area bounded by 6th and 9th Avenues and 34th and 31st streets — should not go forward as proposed.

“We cannot have a plan for the area around Penn Station and not have a clear understanding, let alone agreement, on what happens to Penn Station,” read the letter signed by Reps. Jerry Nadler and Carolyn Maloney, Manhattan Assemblyman Richard Gottfried, Manhattan state Sens. Brad Hoylman and Robert Jackson, City Council Speaker Corey Johnson and Manhattan Borough President Gale Brewer.

The letter follows local lawmaker Hoylman requesting two weeks ago — with the backing of state Sen. Liz Krueger, chair of the powerful Finance Committee — to pull the project’s funding from the 2022 legislative budget proposal. Cuomo is currently negotiating a final state budget with the leaders of both chambers before the April 1 deadline. 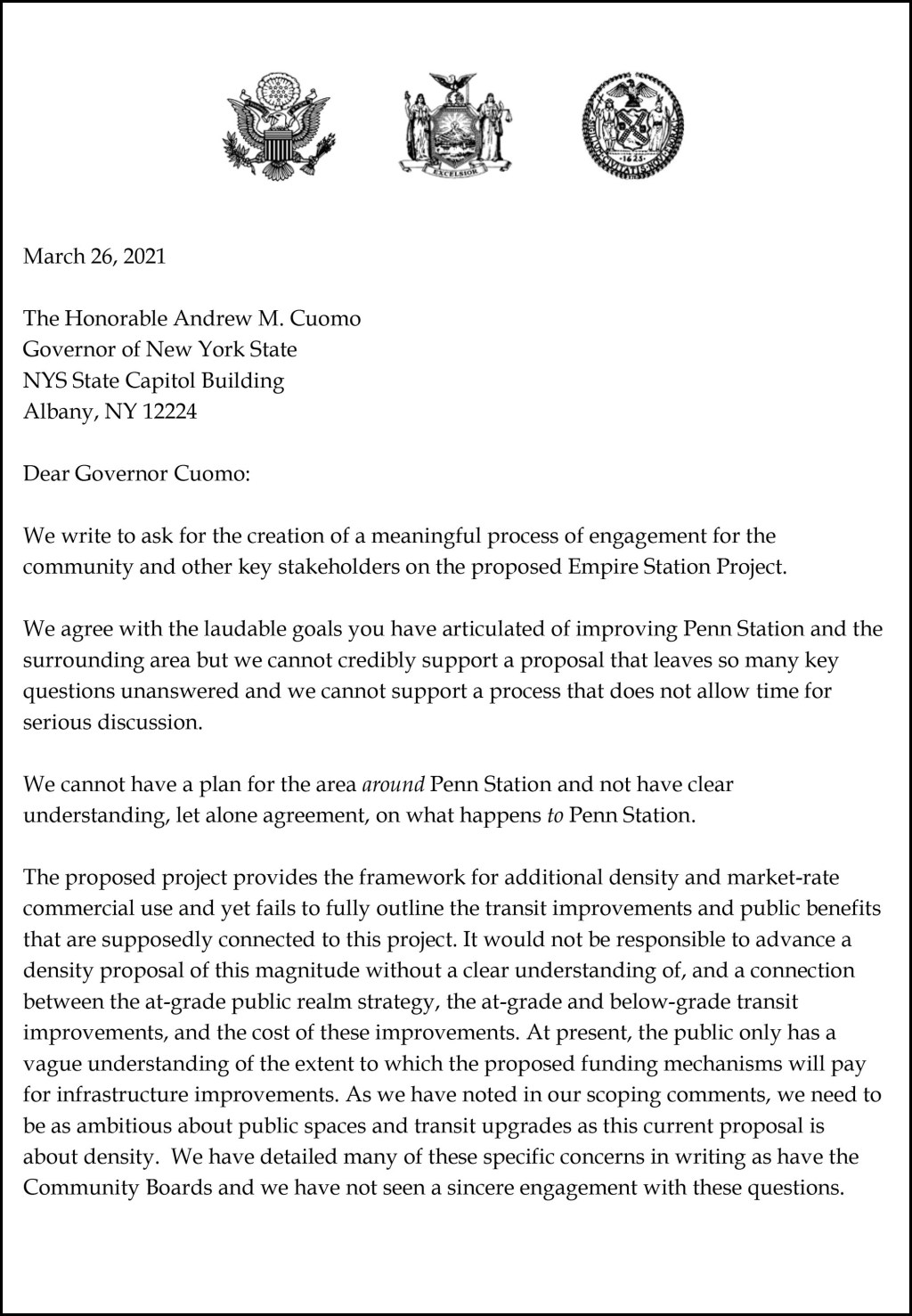 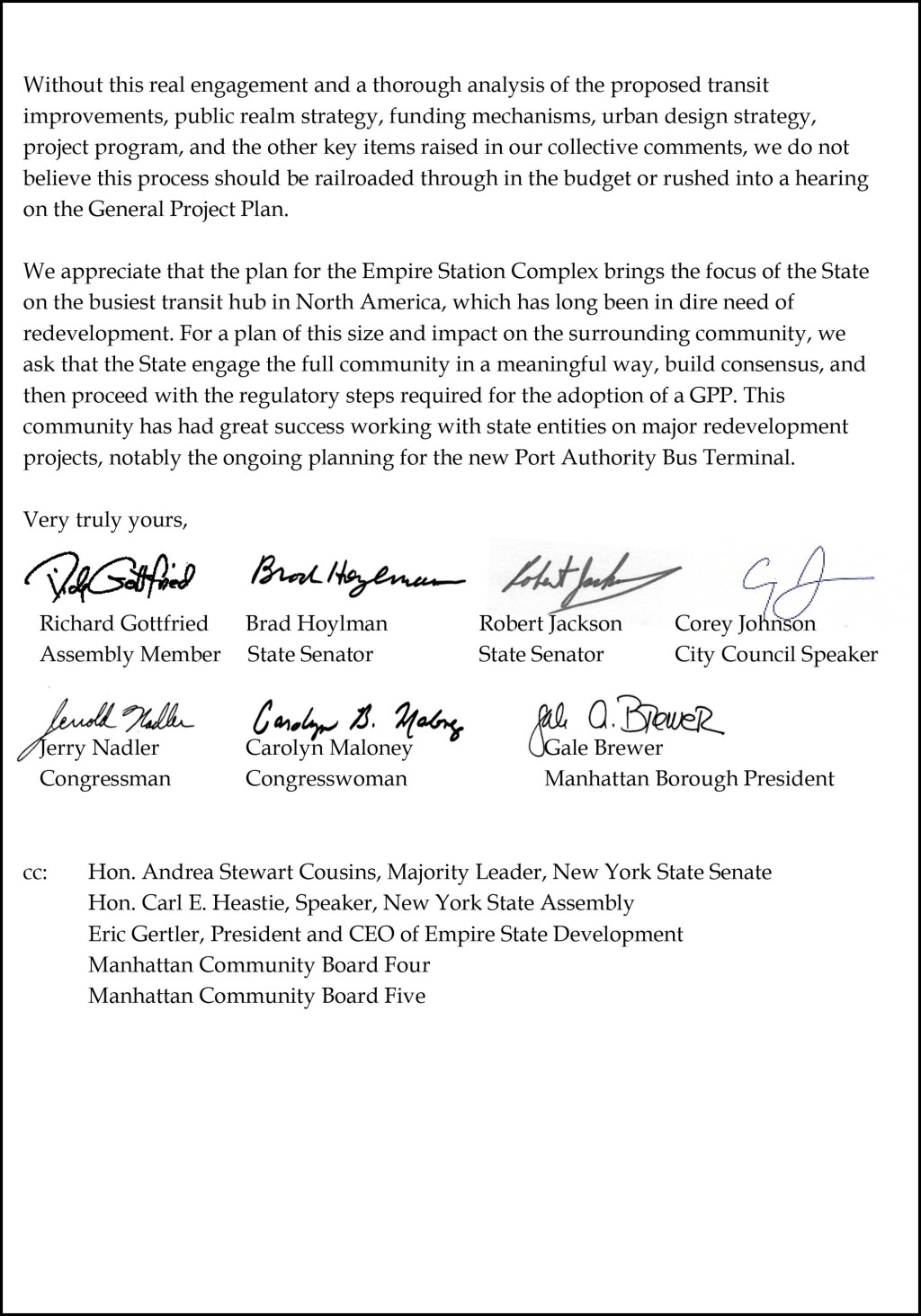 The best part of any fantasy season is the draft,…

The legislative pushback is giving new hope to condo owners near Penn Station who fear the Cuomo plan would vaporize their building through eminent domain.

Omri Semadar, 47, a structural engineer who’s on the condo board at Garden Terrace on 8th Avenue between 30th and 31st Street, said he was horrified when he found out just recently that his home could be torn down for Cuomo’s redevelopment plan.

“I’m worried that I’m going to be evicted from my apartment and my investment will go down the drain,” said Semadar, whose condo is worth about $650,000. “I don’t want a big fight. I was planning to live in this apartment indefinitely. It was my dream apartment.  But I’m am just one citizen. When I saw the plan I said how can I stop this? How can I stop the real estate moguls? I feel I am a cockroach being stepped on.”

Semadar’s building is just one of more than 50 buildings in a one-block radius of Penn Station that would be razed, according to the neighborhood conditions study prepared for the Empire State Development Corp., the state agency running the project.

Semadar said he and other residents were “kept in the dark” and got no official notification.

If the project goes through, it won’t be just Garden Terrace. The Hotel Pennsylvania, Touro College and St. John the Baptist Church and its facilities for the homeless, among others, would be on the chopping block.

On June 30, with the city in the throes of the pandemic, state officials quietly unveiled the plan for the Empire Station Complex, which would allow Vornado Realty and other unnamed developers build 10 tall towers that would purportedly generate revenues to pay for the Penn Station makeover.

The Empire State Complex plan was contained within the splashy multi-billion dollar proposal to renovate and expand Penn Station first announced by Cuomo in January 2020, but the details have been sketchy.

The proposed towers, including five so-called “supertalls” that would rise up to 1,300 feet and two over 900 feet, would surround the 34th Street commuter hub in a two-block radius. 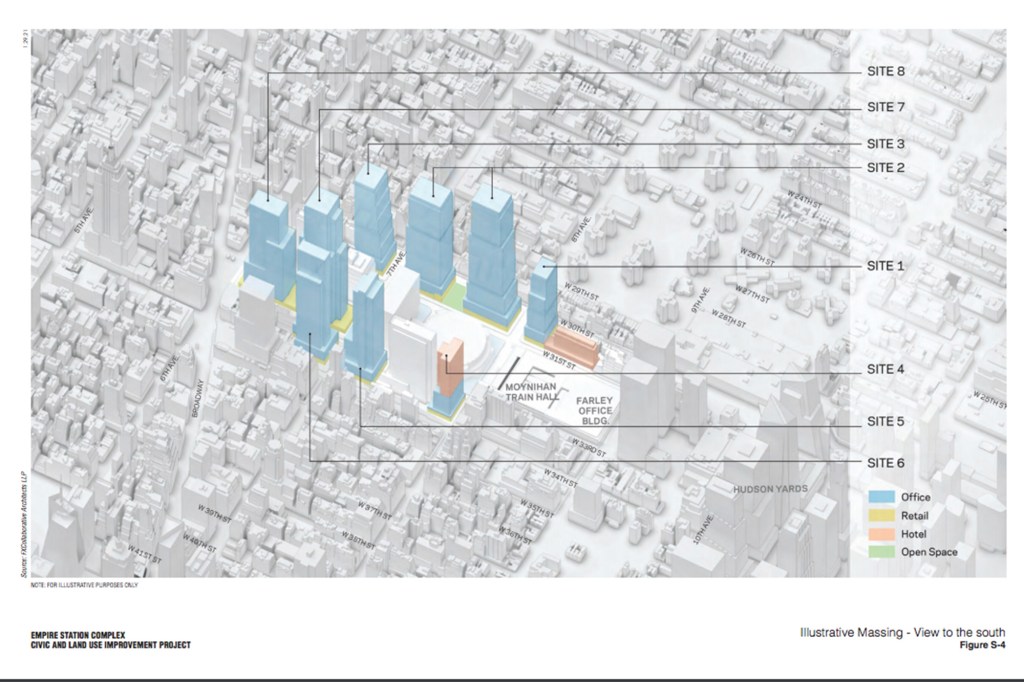 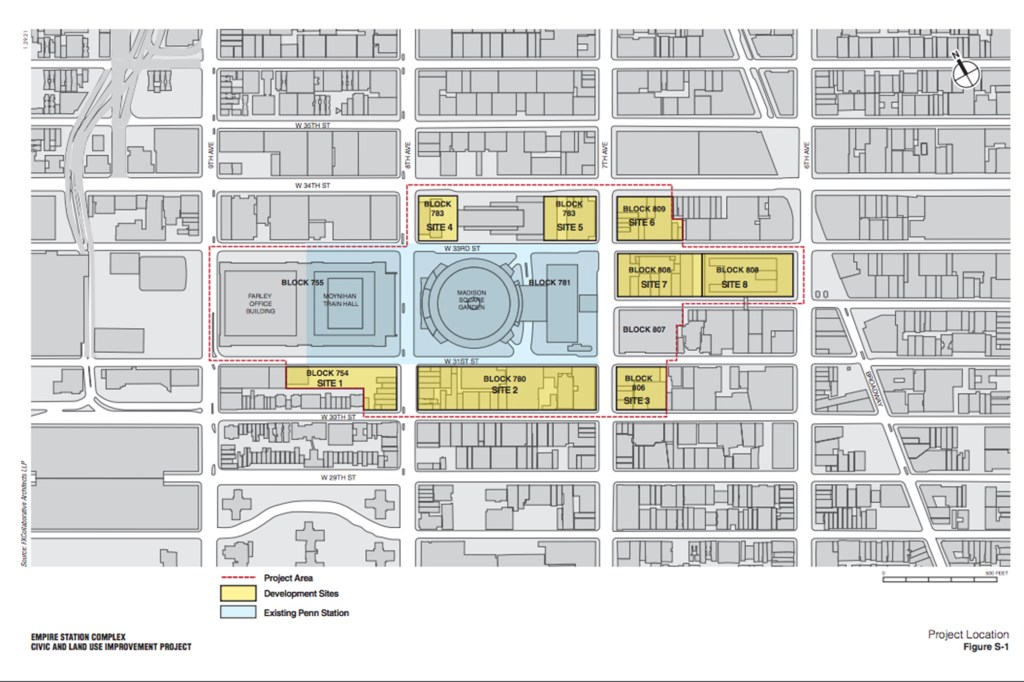 The best part of any fantasy season is the draft,…

A spokesman for the Empire State Dev. Corp. gave a statement to the Post that said the project “will vastly improve New York’s infrastructure and the experience of millions of commuters and visitors, while enhancing the vibrant neighborhood surrounding Penn Station. Like Moynihan Train Hall, this long overdue project will be a critical catalyst for New York’s economy and growth.”

Activists on Community Board 4 and 5 have been fighting the project, pointing out that the development is being overseen only by state agencies with no oversight from the city or the state legislature.

“The government should not be spending tax dollars on a project that is poorly conceived, opaque and possibly mortally flawed especially in time of fiscal crisis,” said Layla Law-Gisiko, the chair of the Land Use Housing and Zoning committee for CB 5. “Especially when this project could be funded by other revenue streams.”

The two boards will be holding a press conference Tuesday outside Penn Station to protest the plan. In the meantime, the Empire State Development Corp. postponed the one public hearing it planned to hold from March 29 to May 12.

“It would have an enormous impact on two community boards as well as the central business district,” he said. “We’re urging the state to weigh this down.”

“Cuomo is trying to set this up so only his people have a say,” she said. “The concept the governor is trying to argue to get around [city approval] is that this is some sort of blighted, poverty-filled area. That’s ridiculous. It’s a major section of Manhattan.”

“We’re not opposed to improvements,” she said. “But we are opposed to locking the city and the community out of the process.”

Psaki ‘not familiar’ with claim Hunter Biden got $3.5M from Russian billionaire