At least 60 killed in Myanmar protests 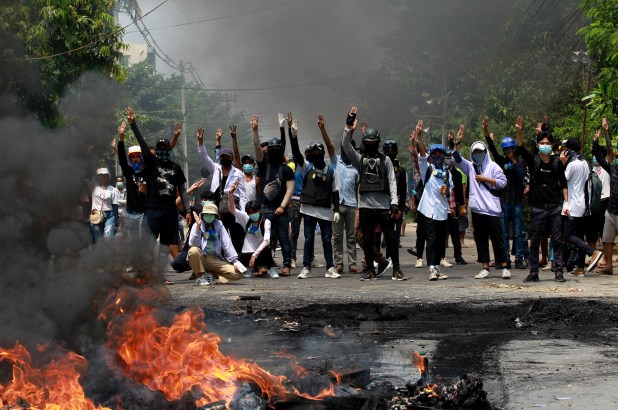 Anti-coup protesters gesture with a three-fingers salute, a symbol of resistance during a demonstration during by police crack down in Thaketa township Yangon, Myanmar on March 27, 2021.
AP

At least 64 people were killed during protests in Myanmar Saturday as people took to the streets to protest the country’s ruling military junta.

The carnage came during a military parade in the nation’s capital of Naypyitaw during which the country’s top leaders vowed to protect democracy.

“They are killing us like birds or chickens, even in our homes,” Thu Ya Zaw, a resident of central Myanmar told Reuters. “We will keep protesting regardless. … We must fight until the junta falls.”

Suu Kyi has been indefinitely detained by the junta and her current whereabouts remain unknown.

“The army seeks to join hands with the entire nation to safeguard democracy,” senior General Min Aung Hlaing said during the parade.

He added that “violent acts that affect stability and security in order to make demands are inappropriate.”

Return of baseball fans and other MLB observations: Sherman

Cuomo probe should be completed before any action