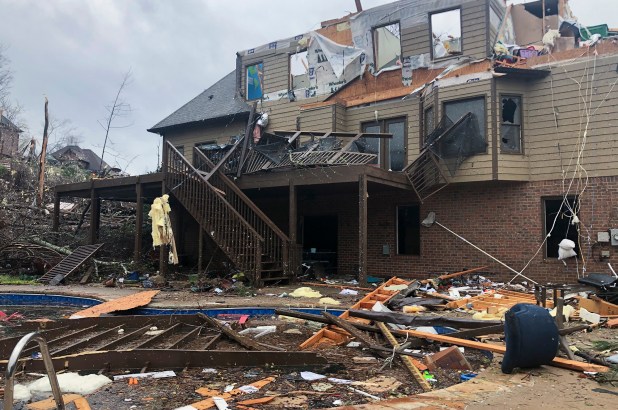 Damage is seen to a home after a tornado passed through the Eagle Point subdivision on March 25, 2021, near Birmingham, Ala.
AP Photo/Butch Dill

Multiple tornados ripped through Eastern Alabama as a drenching storm moved north-east across the state on Thursday afternoon, damaging structures and prompting officials to warn residents to remain indoors and off the highways.

“Everyone inside was okay! They were under their work desks,” one resident tweeted from the hard-hit town of Pelham, along with photos of metal structures that had collapsed like wet cardboard on Belcher Drive.

The storm was so intense, that airborne debris could be tracked near Ohatchee.

“This is a “debris ball” on radar,” local Fox meteorologist Tom Wachs tweeted, also at 2:30 p.m., along with a radar image of the flying wreckage’s path.

Hollywood residents have a cow after landmark sign defaced